Both circles are complex chains of events with no tendency toward equilibrium (social, economic, ecological, etc.)—at least in the short run. Both systems of events have feedback loops in which each iteration of the cycle reinforces the previous one (positive feedback). These cycles will continue in the direction of their momentum until an external factor intervenes and breaks the cycle.

A well-known example of a vicious circle in economics is hyperinflation. 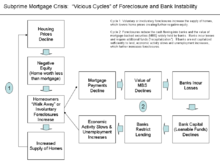 The contemporary subprime mortgage crisis is a complex group of vicious circles, both in its genesis and in its manifold outcomes, most notably the late 2000s recession. A specific example is the circle related to housing. As housing prices decline, more homeowners go “underwater“, when the market value of a home drops below the mortgage on it. This provides an incentive to walk away from the home, increasing defaults and foreclosures. This, in turn, lowers housing values further from over-supply, reinforcing the cycle.[2]

The foreclosures reduce the cash flowing into banks and the value of mortgage-backed securities (MBS) widely held by banks. Banks incur losses and require additional funds, also called “recapitalization”. If banks are not capitalized sufficiently to lend, economic activity slows and unemployment increases, which further increase the number of foreclosures.

Economist Nouriel Roubini described the vicious circles within and across the housing market and financial markets during interviews with Charlie Rose in September and October 2008.[3][4][5]

By involving all stakeholders in managing ecological areas, a virtuous circle can be created where improved ecology encourages the actions that maintain and improve the area.[6]

Other examples include the poverty cycle, sharecropping, and the intensification of drought. 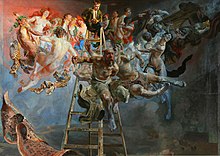